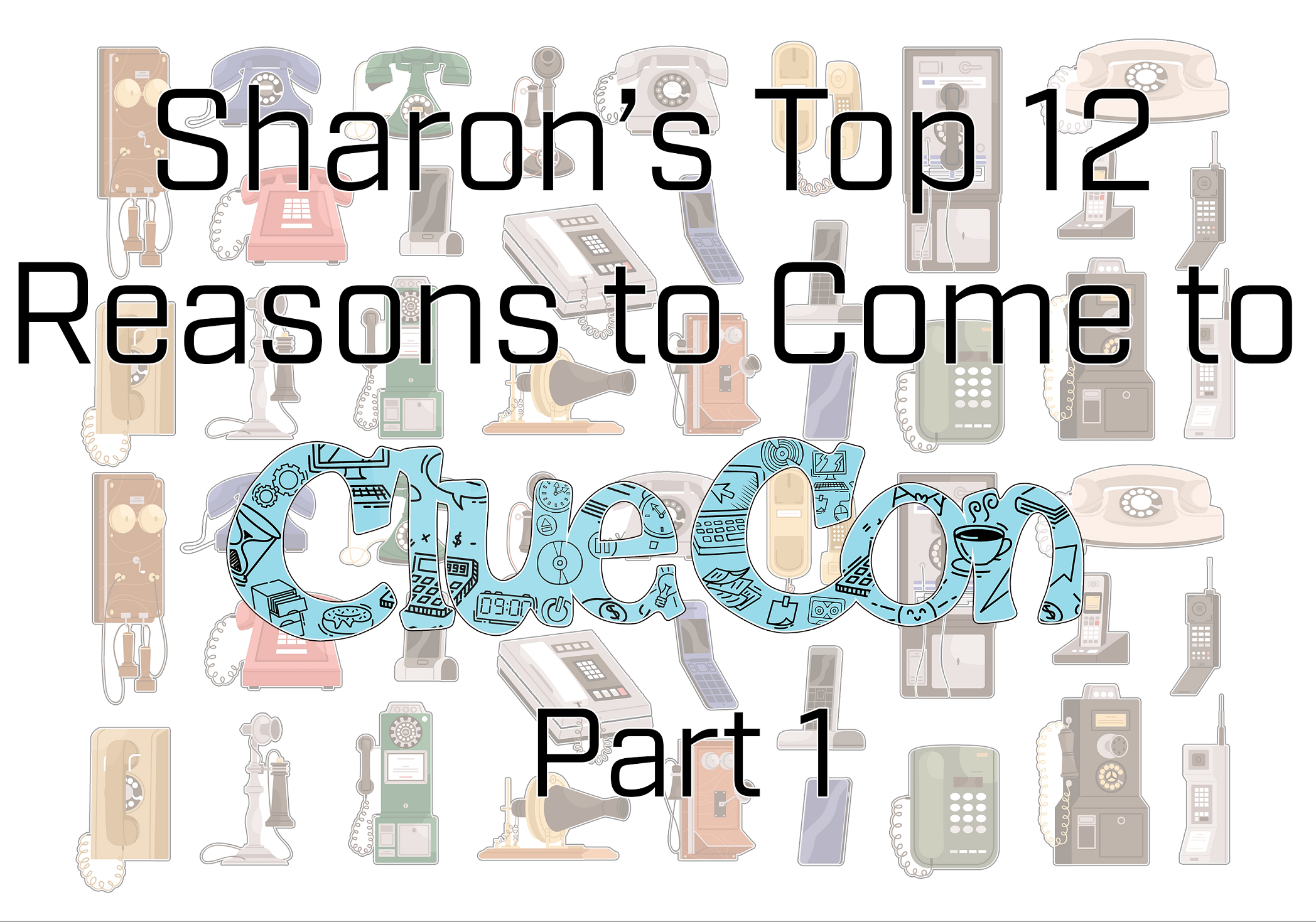 Sharon White has been the main organizer of ClueCon for many years! This is a little behind the scenes look into ClueCon and all her favorite things about the conference.

I first came to ClueCon years ago to hang out with my best friend for a week. I started helping to clean up the registration desk, then before I knew it I had taken over all of registration, and by the next year I had taken over all of ClueCon. It’s been a crazy ride, so I thought I’d share some of my favorite things that you can look forward to at ClueCon this year!

12. The Most Dangerous of Demos

The first time I saw a Dangerous Demo I thought “this is weird, they want to fail?” But as it turns out, that’s what makes it so fun. Dangerous Demos was started 12 years ago by industry veteran James Body for developers to prove their experience and abilities by pushing the envelope of new ideas in a competitive environment. I have seen the craziest demos over the years. One year a cell phone encased in bubble wrap was volleyed all over the giant conference hall and it still worked. Another time, the MC’s hotel room was broken into by the demo contestants who used a raspberry PI to hack into his keycard and project a video of it onto the huge screens for everyone to witness. And my least favorite, a demo where after calling a phone number you must choose a number. Choose the wrong one and it plays the “Baby Shark” song… over and over and over. It’s maddening!

Several awards are given out, including the Crash and Burn prize for the demo that fails the most spectacularly.  But not all the demos fail! Check out this demo from our virtual ClueCon in 2020, one of my favorites, by SignalWire CTO Evan McGee. My face in the video tells you all you need to know.

11. Boats and the Night Sky

Some of the greatest moments at ClueCon happen during our all inclusive evening events. One of my favorites is the Sunset Boat Tour we host Thursday night on the last day of the conference after all the great speakers finish presenting for the week. Everyone at the conference walks the two blocks to the pier, often stopping for some ice cream from a street vendor close to the dock, to board the boat and set out onto Lake Michigan to witness the Chicago skyline at sunset.

My first year of the boat tour I was so naive, staying on the top deck of the boat. That was before I realized the lower deck is where the cool kids go. The fully stocked bar (not only alcohol) is the first place you should hit. Then take your drink to the front of the boat to chat with other developers and the ClueCon team. By the time the sun begins to set over Chicago the boat is positioned out on the lake and the view is astounding.

Usually, ClueCon is in August, when the weather is warm and the sun sets quite late in the day. This year it will be in late October, and the Midwestern chill of autumn will start to settle over Chicago. But don’t worry! The boat is heated.

ClueCon’s hack-a-thon is a day filled with games and fun for every attendee, whether you like to code your way to the prize or you’re a builder at heart. You can work as a team or go solo as you utilize the provided materials to build your creation and win prizes! The day is planned for months in advance to be fun, challenging for most, and inclusive for all.  We now have 3-4 standard games you can play each year.  The Maker Challenge is meant to test your coding knowledge, while games like the FreeCYCLED Challenge are meant for all ages and all skill levels, where there is a simple goal such as making a ping pong ball travel 2 feet using everyday random items like straws, toilet paper rolls and poster board.

Abbi Minessale, daughter of FreeSWITCH founder Anthony Minessale, is the Coder Games Queen, and has hosted the hack-a-thon for several years. Abbi works for the better part of a year with the help of some developers to come up with the challenges, and she also designs the Coder Games t-shirt and other activities. One of the best is our classic “Cards Against Technology” game that was given to each attendee as a gift at the last in-person ClueCon.

The first time I attended the Coder Games I didn’t have any idea what could actually be made during the games. One of our sponsors brought in a 3D printer that year. During the Maker Challenge, one of the contestants used it to print an old vintage telephone, hooked it up to the internet, and actually made a phone call! It was very impressive. One of my other favorites was the year we had contestants build a little remote controlled car using the Cards Against Technology game as a track for a race at the end of the day. It’s always the most creative day of ClueCon!

9. The Softest T-Shirts in the World

This may come as a surprise, but every single person I know, no matter the age, owns a t-shirt.  At conferences they are a staple. If you attend a conference and don’t come out of it with 2+ t-shirts… you chose not to take them. And ClueCon has the BEST t-shirts.

The ClueCon Team takes t-shirts very seriously. The design alone takes months to plan. The shirts are always styled after the conference theme, and that design is followed in the show guide and other printed materials. You also never know what kind of easter eggs you might find in the t-shirt design. One of my favorites was when we had two different designs of the same theme that signified emerging AI technology and the human brain.

At the dawn of the universe, there was nothing, then boom. The big bang sent six elemental t-shirts hurtling across the virgin universe. These infinity shirts each control an essential aspect of existence: Space, Reality, Power, Soul, Mind… and ClueCon. After sending monks, sheikhs, gurus, and a shaman to the vast reaches of Mount Everest on an epic quest to retrieve the most sought after ClueCon Infinity Shirt, the shirt is taken to an underground lab in Atlantis that creates the softest and most durable synthetic material known to man. You will not want to miss out on the best t-shirt ever created!